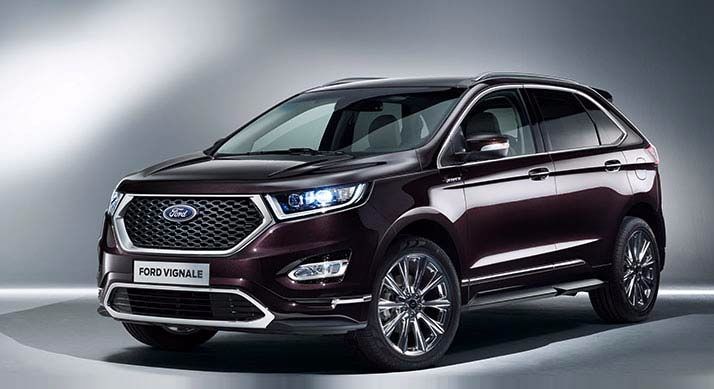 GENEVA, March. 1, 2016 – Today at the Geneva Motor Show Ford revealed new Vignale vehicles and exclusive customer services that will enhance the upscale product and ownership experience.
Ford unveiled the new Ford Edge Vignale – the company’s first entry into the upscale SUV market in the UK – and the new Ford S-MAX Vignale. Ford will announce prices for both Vignale models later this year.

In addition, revealed for the first time was the Ford Mondeo Vignale five-door model that will go on sale in 2017, and a concept version of a forthcoming Ford Kuga Vignale.

Ford also debuted new design options that from next year will enable customers to further personalise the exterior styling of the Ford Mondeo Vignale and Ford S-MAX Vignale.

The expanded Ford Vignale model range will be available to order at UK FordStores, and at customers’ Ford retailer of choice. FordStores incorporate dedicated Vignale Lounges that deliver a personalised purchase experience supported by a Vignale Relationship Manager. Ford has already established 60 FordStores in the UK as the company expects to complete its pan-European roll-out of 500 by early next year.

Ford also is introducing a new travel, event and lifestyle service that will offer Ford Vignale customers valuable offers and access to travel and lifestyle activities, including hospitality experiences at the Chelsea Flower Show in London and the F1 Monaco Grand Prix, and access to VIP premieres at the Cannes Film Festival.

“Our customers have high aspirations, and they want more from Ford. On some vehicles, our top-of-the-line Titanium specifications make up 70 per cent of all sales,” said Jim Farley, Chairman and CEO of Ford of Europe. “With Ford Vignale, we can offer them the absolute best of Ford in terms of luxury and personal service. That’s why we are expanding from Ford Mondeo Vignale to our flagship products Edge and S-MAX, with Kuga to come soon after.”

The first Ford Vignale brand ambassadors – trailblazers from the worlds of fashion, design arts and technology who will feature in the Ford Vignale online media, print media and digital film launch campaigns – are revealed as:

The premium character of the Ford S-MAX Vignale and Ford Edge Vignale interiors is heightened with hexagonal-quilted Windsor leather featuring prominent tuxedo-style stitching for the seats and door interiors, offered in light Cashmere or dark Ebony colours. Ebony leather extends to the central armrest and storage console, and to the instrument panel, which features a woven aluminium applique on the passenger side.

The new Ford Vignale Mondeo model in five-door bodystyle is presented for the first time, following the Ford Mondeo Vignale four-door and wagon models that launched last year. Ford Mondeo Vignale and Ford S-MAX Vignale customers will be offered further customer tailored personalisation options including dark alloy wheels and foglamp surrounds, and exteriors without additional chrome detailing, which are on show for the first time in Geneva.

The Ford S-MAX Vignale, Ford Edge Vignale and Ford Mondeo Vignale will feature as standard theSYNC 3 communication and entertainment system that delivers faster performance and features a redesigned 8-inch touch screen that enables pinch and swipe gestures for the first time.
Simply by pushing a button and saying “I need a coffee,” “I need petrol,” and “I need to park,” drivers can find nearby cafés, petrol stations or car parks, as well as locate train stations, airports, and hotels. The system then guides the driver to the selected destination via the navigation.

Window pillar interiors and headliner are enriched with Alcantara material that offers a suede-effect; the glovebox and armrest storage console are flock-lined; and the centre console offers a premium Opale dark grey pearl-effect finish.

Almost 80 per cent of the record 32,936 Kugas sold in the UK in 2015 were high-specification Titanium models, indicating high demand for luxury variants in the SUV segment that is predicted by industry sales analyst IHS to increase to account for 27 per cent of all vehicle sales in Europe by 2020, from 20 per cent in 2014.

“Our Ford Kuga Vignale Concept speaks directly to the growing trend for luxury SUVs and represents the very best of Ford with premium design, materials and craftsmanship,” said Roelant de Waard, vice president, Marketing, Sales & Service, Ford of Europe. “We see great potential to extend the top end of our Ford product range and offer a special experience that meets the growing expectations of our customers.”

Delivered in partnership with Total Management – a global event, lifestyle and travel agency – the service will offer a carefully selected collection of experiences to Ford Vignale customers. These will include breaks at luxury venues including the Relais & Châteaux Mas de Torrent in Girona, Spain, and Grayshott Spa and Hotel in the U.K.

Exclusive offers for theatre, music and sporting events including French Open tennis also will be offered. Ford will keep customers informed about the latest exclusive travel and lifestyle opportunities via a monthly email update, launching across Europe this month.

Additional customer benefits offered by Ford Vignale include the Vignale Service smartphone app for Apple and Android™ operating systems. The app delivers a direct link to online lifestyle content from the Vignale Magazine, in addition to offering driving tips and information; a dealership locator; and GPS-enabled services including Ford Vignale Park Me, fuel stations locator, and a one-touch connection with emergency services or Ford Vignale One Call.

Ford Vignale Ambassadors revealed
The new Ford Vignale Ambassadors and stars of the Ford Vignale launch campaign are leaders in their fields and reflect Ford’s passion for contemporary design and high-quality craftsmanship.
Joe and Charlie Casely-Hayford are father and son fashion designers at the forefront of menswear with the Casely-Hayford’s brand. The Casely-Hayford’s are the first actively co-working father-and-son team to make a breakthrough in high fashion and between them have styled for the musicians including Lou Reed, Nas, Sam Smith, The Clash, The xx and U2. Joe Casely-Hayford was in 2007 appointed an Officer of the Order of the British Empire, for services to the fashion industry.

“We chose to work with Ford Vignale because we felt there was a strong brand synergy,” Joe Casely-Hayford said. “We liked the idea of combining craftsmanship with innovation, and technology with tradition. We love the attention to detail.”

Also presented is a power bank trimmed in high quality leather; a Vignale leather writing set with an exclusively designed LAMY Vignale fountain pen and ball pen; a leather sleeve for travel documents; and a wallet and leather sunglasses holder. In addition, the Vignale Collection for the first time offers a new range of soft leather-trimmed notebooks.